On Monday night at 1:30 AM we ventured into the car with a wide-awake but very sleepy child after soaking the bed and her pj's. She couldn't get settled and wanted the car to fall asleep in. We've done this before so it wasn't that big of a deal and since I didn't have to work the next day and was worried about the whole bed wetting issue anyway, I was wired to go.

There were a few rules though from the toddler: she insisted, of course, on her bitzy (pacifier), and a blankie. She rarely sleeps with a blankie but boy did want one and it had to be a specific one. We got it right on the 4th try. Then she wanted her minnie mouse pillow too. We got her in the car and she started on about Grandma's Blankie. It took several attempts to understand her (we are working on taking out the bitzy when she talks but at 2 in the AM it wasn't worth the fight) and after repeating what she said again and again, we caught on to Grandma's Blankie.

The problem??? What was Grandma's Blankie?? Then I got it. The Luvee that Grandma made her. She got one when she was born and Grandma made her several more to have in the car and day care and to be the hot baby item for all her friends to give as gifts. It's a rectangle shaped flannel material on one side and minky dots on the other with different textured but coordinated ribbons all around. Hadarya doesn't sleep with them at home anymore, but she does at daycare. At home they are her babies blankies. YET... she knew, somehow that it was made by Grandma, and she had to have it in the car that night.

She got it. Slept fairly quickly. and tonight asked for Grandma's Luvee at bedtime.
Posted by Jenn at 10:37 PM 1 comment:

Here are photos of our love on her 2nd Birthday. We can't believe she's already 2!! Where did the time go?? 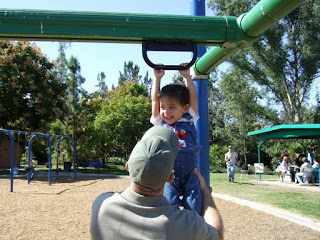 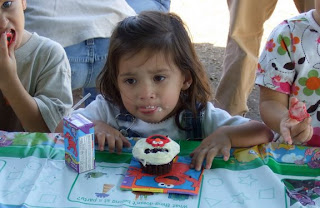 Although we've talked about and talked about building our own Sukkah every year for 5 years of our marriage, it just hasn't happened. We have had a backyard, albeit just dirt, but a place to build one. We just haven't gotten it together. This year was no exception but next year will be different. Nana and Saba came through with a fabulous birthday present for us both: a Sukkah Kit! We are beyond excited to have the directions, the lumber, and all the mechanics to make an 8 x 12 structure. Next year it's going to be fabulous. This year, we continue to "crash" at our friends Sukkahs to experience the holiday.

The word Sukkot is the plural of the Hebrew word sukkah, meaning booth or hut. During this 7 day holiday, Jews are instructed to build a temporary structure in which to eat their meals, entertain guests, relax, and even sleep. The sukkah is reminiscent of the type of huts in which the ancient Israelites dwelt during their 40 years of wandering in the desert after the Exodus from Egypt, and is intended to reflect G-d's benevolence in providing for all the Jews' needs in the desert. The sukkah is a temporary structure used for meals throughout the holiday.

We spent Monday night with our 2nd family...the Meltzers in their Sukkah. Hadarya had a blast playing with the kids, eating at the picnic table outside, and just soaking up the atmosphere. She is such a social kid! We had delicious food, great company, and headed home for bed around 7:45. Munchkin put on her pj's with all the other kids and wore her new birthday hippos from Baba Karen.

Around 1:30 AM she awoke crying, which is unusual. Yiftach went in and tried to give her something to drink and pat her back. Didn't work. She kept asking for Ima. So he finally took her out of her bed to discover she was completely soaking wet!! Her legs were soaked as was her freshly made bed through 2 sheets and a mattress pad.

Ima got out of bed and went to get her not yet realizing how wet she was. I took her to my room and laid her down to change her pj's. She cried the whole time from being cold and uncomfortable and wanting to sleep so badly! It turns out that somehow her diaper was not longer attached. One side was totally undone and the other barely hanging on. The diaper was dry but her legs and pj's were soaked!

She refused new pajamas and cuddled under a warm blankie on our bed. We stripped her bed and put on a new sheet but she wouldn't get in. She was pretty awake and just kind of freaked out. This is only the 2nd time she's wet through a diaper/pj's in her life! So we ended up having a snack and taking a ride in the car. She crashed quickly to the lull of the car and we transferred her to her bed.

We unfortunately were awake for a little longer since this was way more than just waking up! We are working on securing diapers better and trying to make sure she is able to sleep without being wet again.
Posted by Jenn at 11:51 AM No comments:

Somewhere between 6:45 AM and 7:15 AM a sweet little voice can be heard calling, "IMA" down the hallway. That's my cue that my angel is awake. I respond with, "HA-DAR-YA!". She responds back in a different tone, "EEE-MA!" Then it's my turn, "Hadar-YA!" Until I make it into her room and she giggles at me and smiles. Rarely does she call for Aba. She's learned that Aba graciously gets up in the middle of the night, unless there is an emergency such as the night before last and then all she wants is Ima. (See next post for that incident).

Because I am on a fall break from work, we've been getting back into my bed and cuddling for a while. She just thinks that is the best of the best to snuggle into our bed and against my growing belly. We tickle each other, sing songs, and smile into each others faces.

It's sweet and delicious and I am going to miss it when I go back to work next week!
Posted by Jenn at 11:44 AM No comments:

And I thought I would be alone...

It's been almost 6 years since I was married and it's often hard to imagine another life without my husband, my daughter, being an adult and the never ending bills, laundry, and cleaning that comes with it. That was not a complaint...just the life of grown-ups! We got married later than most of our friends (at 32 years old) and waited a year to even begin thinking about starting a family. We wanted to enjoy being married first.

Most of my friends already had kids by the time I got married. The oldest turns 18 tomorrow. Most of them are dealing with school age children and are at different stages in their lives with sports, dance, homework, and a variety of other activities that consume your children. Most of them have at least 2 and many of them more. Since we got married much later than them and therefore were going to have children later, I figured that I'd be alone in my pregnancy and child-rearing stages. It would not have been exactly how I would have planned it, but we plan and G-d laughs.

When we struggled to even get to the first stage of the game by getting pregnant, I knew for sure that I'd have my children but all my other friends would have theirs first and we'd be at different places raising our kids. Hard to take. Hard to explain. Tough to manage emotionally even though there was not a lot I could do about it. I even had a friend tell me that it didn't matter so much because I would make new friends who had kids the same age.

BUT I DIDN'T WANT NEW FRIENDS!!! I liked my old friends and the history and time we'd invested. I wanted to be a mom with these friends and not have to start all over.

Rewind to 2 years ago when our daughter arrived on a beautiful sunny Sunday morning. In our group of friends, she was 7 months younger than 2 of our closest friends girls, 4 months older than another friends' daughter, just over a year older than my best friends twins, and 2 years younger than the group of our friends who had boys all at the same time. She fit right in age wise with everyone else and we couldn't have been more delighted! It was great.

Now she is 2 (as are most of the other girls or about to be!) and we are delighted to find ourselves pregnant with a healthy baby due in just over 2 months. When we first found out, we were thrilled to be adding to our family and being able to experience the joy and miracle of pregnancy. It doubled when we found out our dearest friends (who have a daughter 7 months older and a son 2 years older than H) were also expecting and due 9 days before us!!!

I WAS NOT ALONE! I was going to have a baby at the same time as our close friends.
WOO HOO!!

That's a total of 8 babies born within 6 months of each other. I am so excited and so thrilled to not have to make new friends. To have families with other kids having kids about the same age. This is my babies hebrew school class. It's the b'nai mitzvah track. Even though I had a plan, G-d's plan was better. Have faith and look what happens.
Posted by Jenn at 8:48 AM No comments:

This morning H was very willing to put on her shirt for school and have her hair done while she was busy eating her french toast sticks. She was all done and ready to go see what Aba was doing in the bedroom and let Ima blow dry her hair.

I asked her to take off her very dry diaper and pajamas so we could put on her shorts. She somewhat allowed me to do that but kept trying to run off. Now I LOVE the sight of her naked tush fleeing from my hands ready to swaddle on a diaper, but we had to get going or we were going to be very late! She kept saying hens, hens, hens. I just repeated and then she repeated and I said ok honey. Not really knowing what hens were and what they had to do with diapers. Finally I let her go and reveled in the sight of cuteness of her backside.

I started calling her to come back and she returned promptly with the changing pad we lay on the ground that has HANDS all over it. HANDS not hens. She was telling me that she was going to get the diaper pad and she did and she laid down and she let me put on her diaper.

Smarty pants. I should have just listened to her the first time and let it go!
Posted by Jenn at 3:27 PM No comments:

My baby girl turns 2 tomorrow and she is a child now. Not a baby and not really a toddler so much. She is an amazing person who is kind, considerate, adorable, funny funny funny, and easy going. We love her to pieces and fall in love with her more and more each day.

I can think of no greater place to be in life than Hadarya's Ima. Thank you baby girl for sharing your life with me!
Posted by Jenn at 3:20 PM 1 comment:

Best of the Blogs